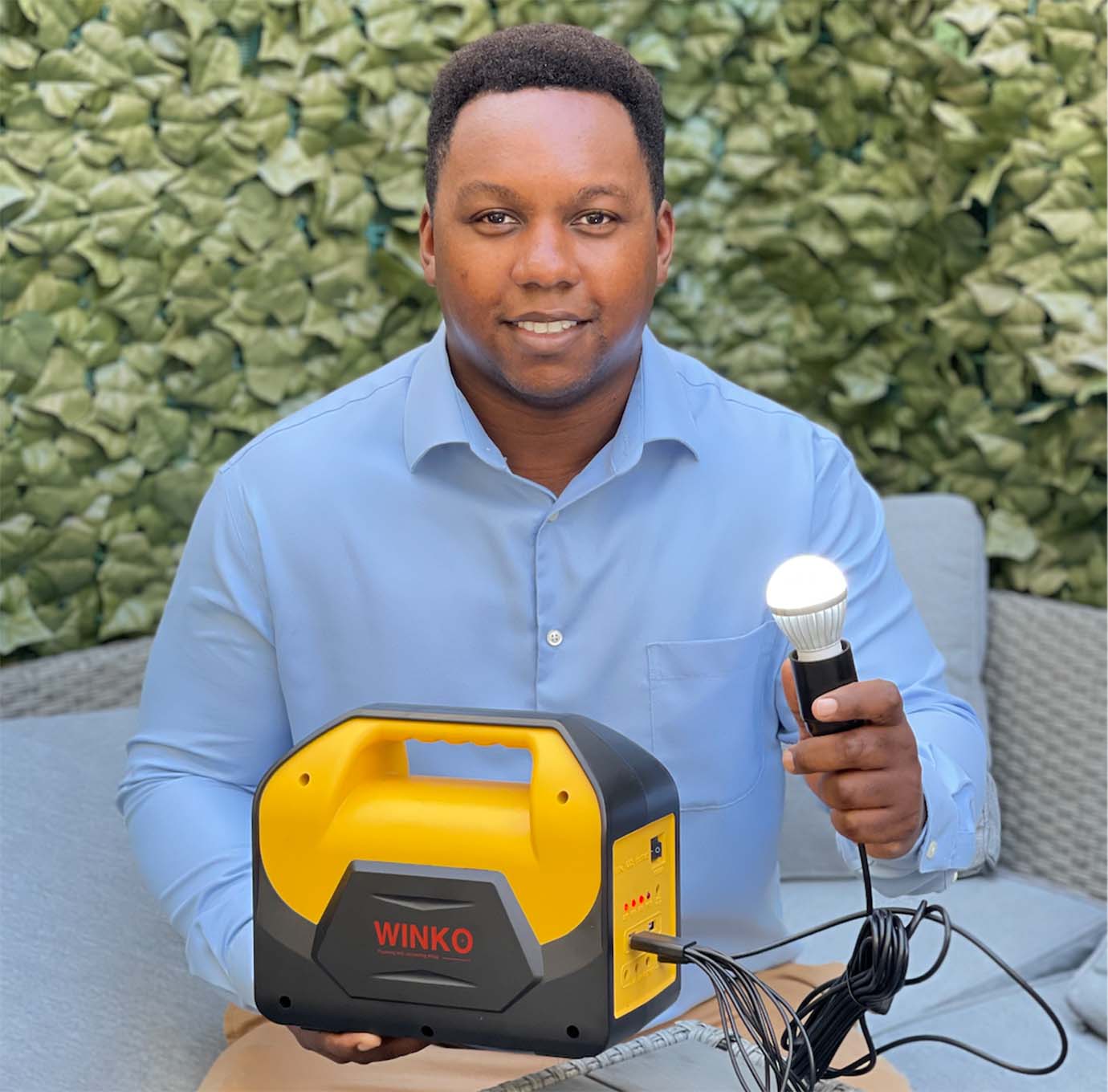 While many in Africa’s most robust cities embrace technology and the information age, people in rural areas still have no access to the knowledge and opportunities fostered by the digital world. In The Democratic Republic of the Congo and West Africa, over 250 million individuals are considered off-the-grid.

With slow grid expansion, most countries are unlikely to connect their entire populations to grid electricity for decades. Meaning off-grid power solutions are not an alternative but the only option to ensure people aren’t left behind.

I spoke with Akonkwa Mubagwa, CEO of Winko Solar, about what led him to create Winko Solar, building a team in Togo, and tips for entrepreneurs tapping into Africa’s tech ecosystem.

How did your journey lead you to create Winko Solar?

I’m from DR Congo, but I was born in Belgium. My parents left the DRC because my father got a scholarship to pursue his Ph.D. at a university in Belgium. That opportunity transitioned our family from poverty to living in a developed country. This set the stage for how I view opportunities as I realized that where you’re born could significantly impact your life.

We left Belgium and moved to Zimbabwe for some time, then lived in the US for a little bit, and finally came back to Belgium. Despite never living in DRC, every year, I visited family for an extended period.

As a kid, I had two passions, technology, and music. Though they appear to be on opposite ends, they are very similar. Both require immense detail, provide a space to be creative, and, most importantly, impact people. When you write music, others can enjoy it. Similarly, when you write code, even if it’s a small automation, it has the potential to make someone’s life easier or more enjoyable.

I chose to study computer engineering for undergrad because I was a math champion and wanted to make video games. After undergrad, I studied management and went into consulting.

In 2009, I started a non-profit with my father called Fast Africa (Foundation for Advancement of Science and Technology), where we organized courses and training to teach Congolese undergraduate and graduate students how to program computers and leverage information technology. I taught our students Linux, SQL, HTML, Apache, PHP and helped them develop an online presence to sell their skills.

Running the non-profit, I realized the need was even more fundamental than training. People needed access to information. My initial thought was to provide e-readers to students. It’s cheap, you can send out a PDF of books, and the charging lasts a long time. But giving people access to information meant nothing if they didn’t have access to electricity or light. This realization inspired Winko Solar and our desire to bring power to homes across Africa.

What is Winko Solar and how did you put together the Winko box?

Our mission at Winko Solar is to connect every single home in Africa so that people have access to the information they need. We want to reach a thousand customers by the end of this year and twenty thousand by next year.

We picked solar for two reasons. First, my co-founder is from China, which has the best solar manufacturers. Second, the sun is a wireless source of energy that you can access from anywhere. You don’t need any infrastructure. All you need is a solar panel. We added a device and a data plan to the Winko Box because we realized people needed more than an energy source to access information.

For $9 a month, less than 10% of our customer’s monthly buying power, we provide solar-powered energy, a feature phone, and a 500-megabyte data plan. After 36 months, the solar-powered box and the phone is theirs. All they have to pay for is the data plan.

I designed our device with two interns from Berkeley, and it's already passed the VeraSol certification, which allows us to sell in Togo.

We have a partnership with KiOS, a lightweight operating system that allows us to control the experience that the users have—for example, blocking specific ports. This is important because a 500-megabyte data plan can run out of data if you stream two Netflix videos.

We partnered with a telco operator for the data plan, offering them a guaranteed contract for 36 months in exchange for a smaller data plan than what they offer in the market.  Our telco partner benefits because we offer them market penetration.

Why did you decide to launch in Togo, and how did you identify talent?

We’re focusing on Francophone West Africa, and Togo is our pilot country. We liked Togo because it has maritime access so you can send things overseas, it’s stable politically, and it has the CFA currency, which is shared by all the other Francophone countries in West Africa, so it’s easy to do business and expand.

Five of our team members are based in Togo. We initially connected with them through our relationship with Astria Fataki, founder of Energy Generation and Forbes Africa 30 under 30 recipient.

Energy Generation is one of the biggest solar energy incubators in Africa. Astria helps entrepreneurs and students that want to get into the solar energy market. Their presence in Togo was one of the main things that convinced us to start there because access to talent is critical to our success.

Two of our team members are focused on managerial/ strategic work, and three people are field operators, and their main focus is maintaining the kits, packaging, and giving us a pulse on things like gas prices or the price of a mechanical piece.

Our team on the ground is a huge part of our success. They helped us develop our strategy, and they're the first point of contact for the telco operator. They also set up the legal structure, take care of our inventory, and do the product demos. We communicate daily via WhatsApp. It's been difficult because we've had little opportunity to travel since the pandemic, but they are still doing an excellent job.

What were some of the challenges you’ve faced building​ Winko Solar? ​

We say Built in Africa, but I’m from the DRC. I’m not from Togo. Togo is a different country with its own culture and history, so we had to overcome some complexities and cultural differences.

In Togo, when you talk to top-level executives/ decision-makers, there’s a way to do it, and if you’re unaware and make a mistake, you can sever the relationship fast. We made some mistakes in the beginning, but we learned from them. My suggestion to anyone who may face this challenge is to have humility and be willing to learn.

We’ve seen the common mistake of not setting up a payment structure that makes sense based on the pace people earn and spend money. While people can afford to pay $15 a month for a service, it won’t work if you don’t offer the ability to pay daily. Asking for $15 a month in rural Africa is like a cell phone provider in the US asking you to pay your bill for the whole year.

Our team sits at a unique juxtaposition where we understand the customer to some extent and have the pedigree to raise the capital. But the challenge is often we’re pitching to people who’ve never been to Africa. They went to a top school or Ivy League and then into VC, where they were trained to identify the right key performance indicators and criteria to look for when assessing an opportunity.

And while they might be doing exceptionally well as a VC for US-focused companies, Africa is very foreign to them. And while there’s nothing wrong with that, it makes it difficult as an underrepresented and global entrepreneur to articulate and sell your vision.

In early-stage financing, decisions are often based on intangibles — a feeling, an experience, or them recognizing themself in the founder.

The feeling/intangibles and classic indicators often exclude startups that are valuable but outside the normal pipeline that these investors see. Our challenge is conveying our mission in a way that is true to our company and resonates with the people holding the capital. This is something we are learning as we go.

Fortunately,  we’ve connected and built relationships with savvy and experienced investors that have worked with African companies. These are the people we focused on.

Across our supply chain, from China to Africa, it’s a challenge. Right now, there’s a shortage of the chips we use, which increased our lead time from 30 days to 70 days. There are also logistics at the border and in-country, which is as difficult.

What were some of your assumptions and expectations that you had going in that changed?

When we launched Winko Solar, we had an ideal user and purpose for the phone. We envisioned a use case being a mini CRM (customer relationship management) for a person who cooks and sells meals. One of the challenges they face is predicting how much food to cook. Traditionally, they make a lot of food and sell whatever they can, and at the end of the day, what is left goes to waste because there are no refrigerators.

With a phone, they can reach out to their clients on WhatsApp, send pictures of what they’re cooking, and clients can place their orders. Allowing the cook to optimize how much they’re going to produce. They don’t have to know how to write. They can send an audio message.

Since we’ve launched, we’ve seen some customers use the data plan to contact their families instead of to run their business. We’ve had to accept that you can’t impose a vision on people.

Fortunately, we’ve had some great stories from our customers. One of them completed their whole academic year on a Kindle. She followed an online program from Europe with just a Kindle powered by one of our prototypes. It’s a huge accomplishment, and it gave us perspective. We realized every year we don’t succeed with our business model; we’re sacrificing a generation.

Also, when we came into the market, we wondered why people were skeptical of us and resisted. The reality is that we knew way less than we thought and that they knew way more than we thought. They could see where we were going to fail.

Tips to other entrepreneurs considering tapping into Africa’s tech ecosystem?

Have the audacity to feel legitimate. If your intention is pure, it doesn’t matter if you’re 1st generation, 2nd generation, or 3rd generation Diasporan, if you’re African-American, or if you’re even Chinese. If you intend to better the African continent, go for it. We need it. Don’t wait for the authorization to start acting. Just do it.
Don’t worry about what people say or let others bring you down. Most of the people being critical are not trying to build anything themselves. While the people that are in a position to criticize usually don’t, they encourage.

If you stick in there long enough, you’ll gain people’s respect and see success.  But the only way to overcome ignorance resistance is contact and time. If you’re good at what you do, over time, people always overcome their initial prejudice. When we started, people had doubts because it took us some time to make progress. But as we made progress, their confidence in us grew. So hang on to those who believe and ignore those who don’t because, in the end, it will work itself out.

Thank you! Your submission has been received!
Oops! Something went wrong while submitting the form.
More related stories, just for you
Bantaba is connecting African startups to the talent and resources of the Diaspora
How InnovaRx is transforming healthcare delivery in sub-Saharan Africa