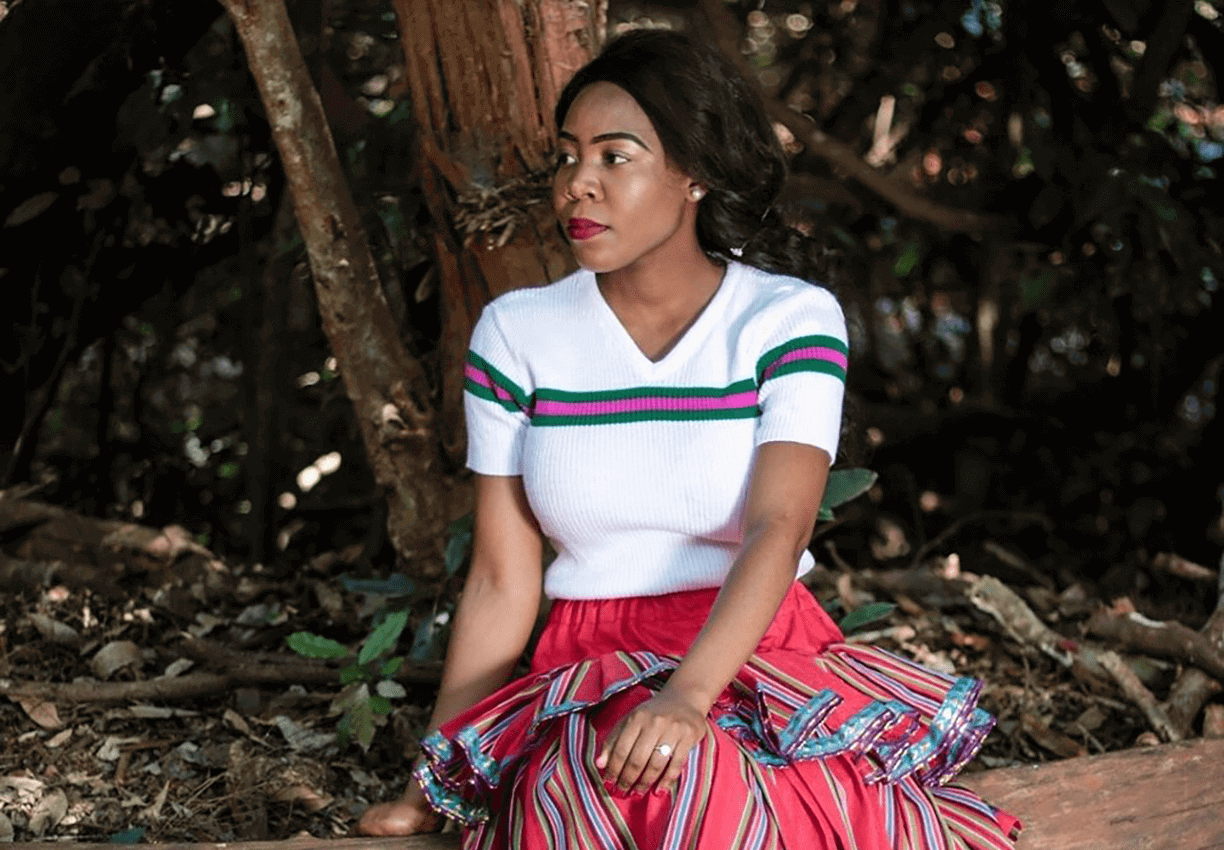 According to UNESCO, every two weeks a language dies with its last speaker, and 50% – 90% of languages will disappear by the next century.

Today, due to factors like globalization and urbanization, hundreds of indigenous languages across Africa are on the verge of extinction.

Language preservation transcends holding onto a preferred communication style. Language is the lifeblood of a culture’s values, customs, and history.

Of South Africa’s 31 spoken languages, only 11 are considered official. Committed to the longevity of their native tongue, speakers of these unofficial languages are not leaving their destiny up to chance.

Leveraging the power of technology, Mukondi Dumela is ensuring that his native tongue lives on for many generations to come.

I spoke with Mukondleteri Dumela, Software Developer at BBD and Founder of Xitsonga.org, about building Xitsonga.org and the challenges of building a language/culture app, what it takes to be a successful software developer and Tech in Africa.

How did you translate the requirements of your business problem into code?

I come from a small rural area called Nyavani  in Limpopo, which is in the northern part of South Africa. I never really got exposed to the tech space until I went to University, where I studied Bachelor of Information Science in Multimedia.

The thought process for Xitsonga.org started while I was still at University. On the surface, building Xitsonga gave me the opportunity to apply what I learned from my coursework. However, more importantly, Xitsonga.org was built because I struggled to find resources while doing some research around the language, which ultimately inspired me to build the platform.

Here in South Africa, because we have 11 official languages, some of the smaller languages are somewhat neglected. If you went to Google Translator and searched the Xitsonga language, you won’t find a translator because Google doesn’t prioritize minority languages.

I built the platform to teach people interested in learning Xitsonga and provide a service that we the Vatsonga people can use to translate.

The first step was seeing what work was being done already, and through that process, I found a couple of physical dictionaries that people had created. I tried to gain copyright permission to publish, but that wasn’t successful, which led to my second approach.

I created a solution that allowed people to contribute to the platform, while I managed which content was accepted. Most of the development work at the beginning involved finding ways to integrate the user-generated content seamlessly. After that, the focus shifted to how to display the data to users.

What role did empathy play in building Xitsonga.org?

Empathy played a huge role. As a native speaker, I had to be empathetic about my approach to teaching people about our language and culture.

Also, building Xitsonga.org came from a deeply personal and emotional space. My commitment to representing the people from where I come from has allowed me to continue throughout the years, even though there isn’t much money generated from the platform. Remembering our mission and purpose gives me that push to work even when I get lazy.

On our platform, we have two languages, English and Xitsonga, and the translations are either from Xitsonga to English or vice versa. First, I got a list of commonly used words in English, and then I found people to translate them into Xitsonga.

Since I was still at school when I started building it, I reached out to a few students I knew spoke and understood Xitsonga better than I did. When I went back home during the holidays, I talked to a few people around my area about what I was doing, and they provided tips on how to package it.

I connected with three primary school teachers, and their perspective was that the platform should be focused more on learning than archiving, meaning it shouldn’t just be a list of words that people can access online. Instead, they should be presented in a way that encourages people to learn the language.

What were some of the biggest challenges you faced building Xitsonga.org?

The biggest one came a month or two into the project. There’s a lot of politics around African culture, especially around how people prefer to be called versus what they should be called historically.

I got a call from a few organizations responsible for protecting the language and culture. And we had a long conversation around, why I should take down the platform, and how naming it “GazankuluOnline” sort of works against what I’m trying to do. That was the first challenge, which was actually quite scary.

The second issue, which is still an issue to this day, is finding people to commit to the content role.

I’m a technology person. I prefer to sit behind a PC and build stuff. I’m not a scholar of the language, and I’m not a teacher by profession. I’ve sort of had to stretch myself, and it’s a great learning process, but at the same time, I feel other people could better play those roles.

What is it like building an app that is around language and culture?

Anything that revolves around language, especially in South Africa, is sacred. People have a sense of commitment to their culture and are willing to lose everything they have to defend.

When you build tools to educate people about culture and make a tiny mistake, the backlash can be overwhelming. They’ll go to the lengths of telling you to shut down.

To highlight an example, in Xitsonga, a lot of surnames are homonyms of words used in the language. “Masango” is a surname, and it also means sexual intercourse.

What I got wrong on the Website was you could access an item in the dictionary using the URL. Meaning if you type xitsonga.org/dictionary/masango, you’ll get the translation.

Unfortunately, it picked up the sexual intercourse translation when someone was looking for their surname.

I received an angry email from someone with the surname Masango who instructed that I should shut down the platform, and although it was a technical error, that wouldn’t have been sufficient. Users don’t care if you have a URL or backend issue. They want to be represented correctly. So there've been a bit of those types of situations every now and again.

But on the positive note, people are really receptive to the work we’re doing. I get two or three emails daily where people are thanking us for the work that we do. 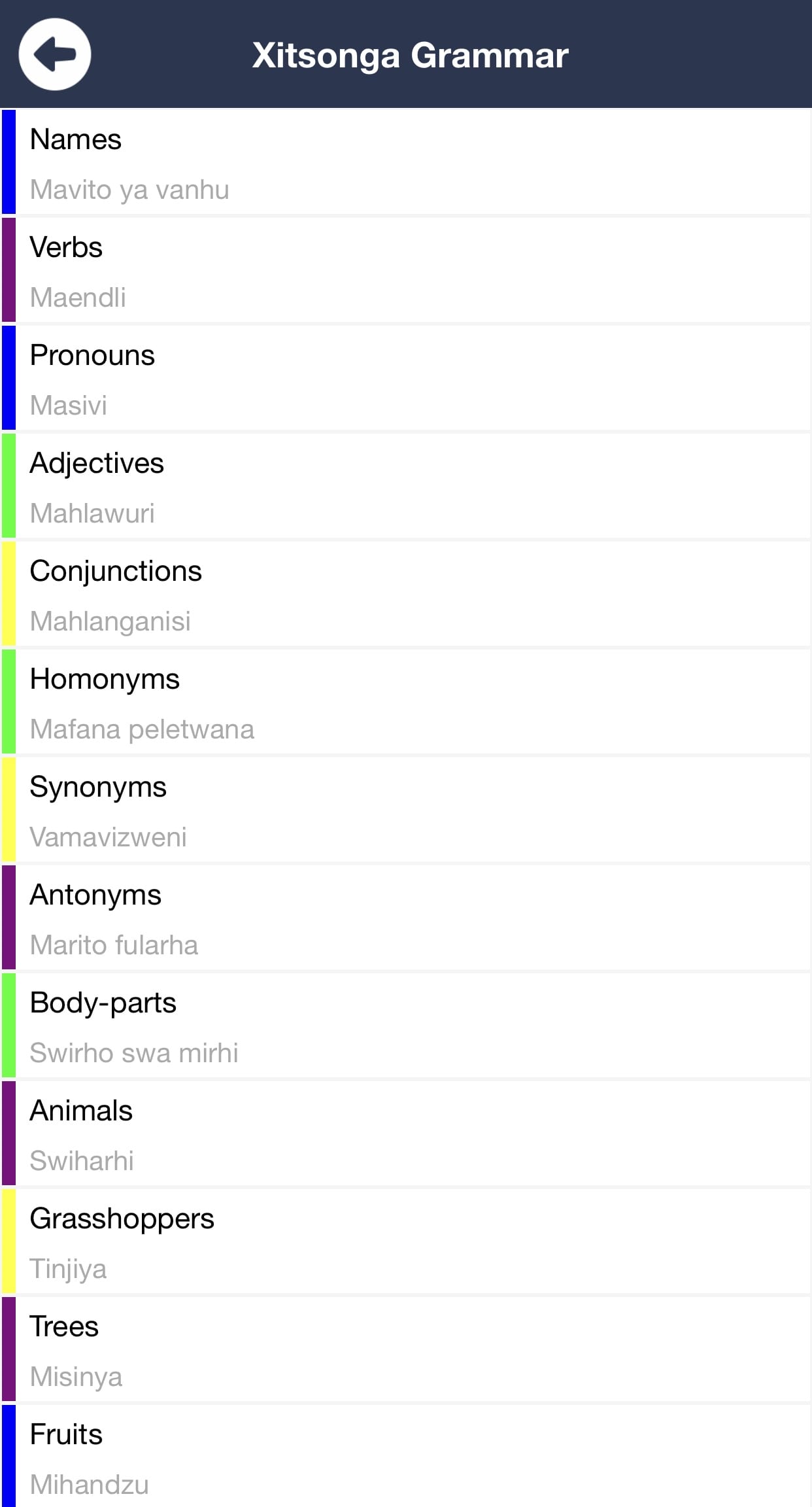 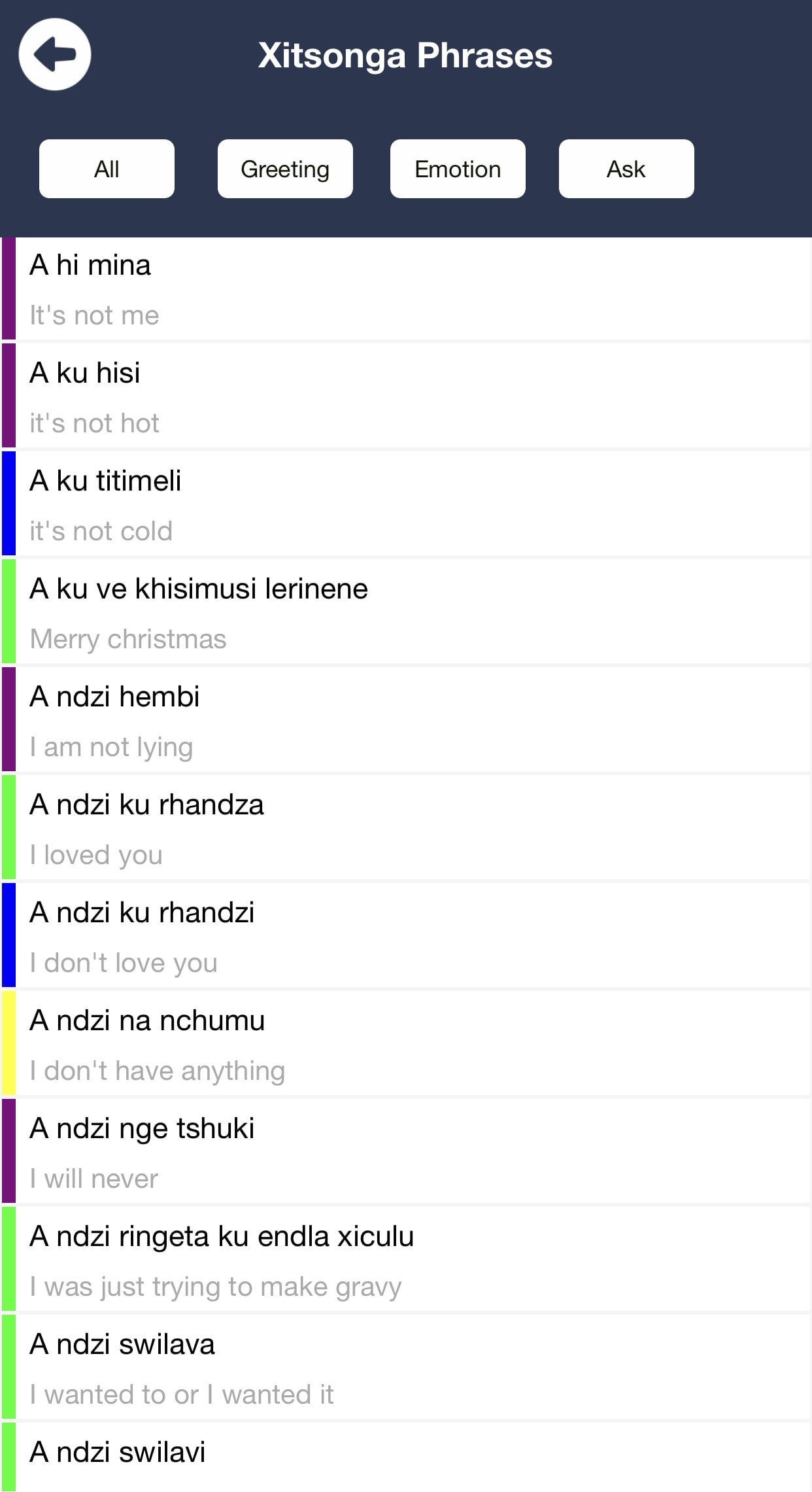 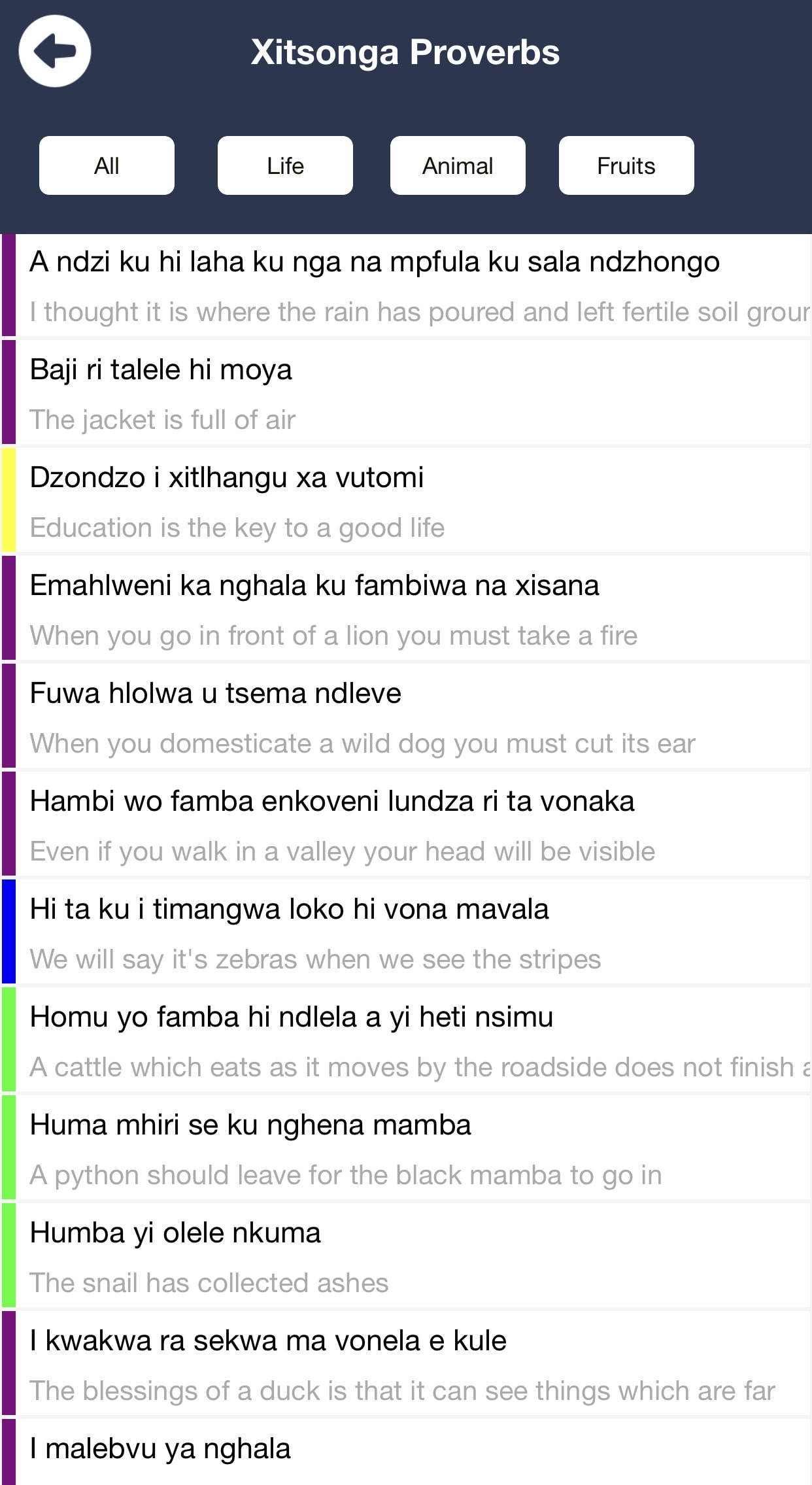 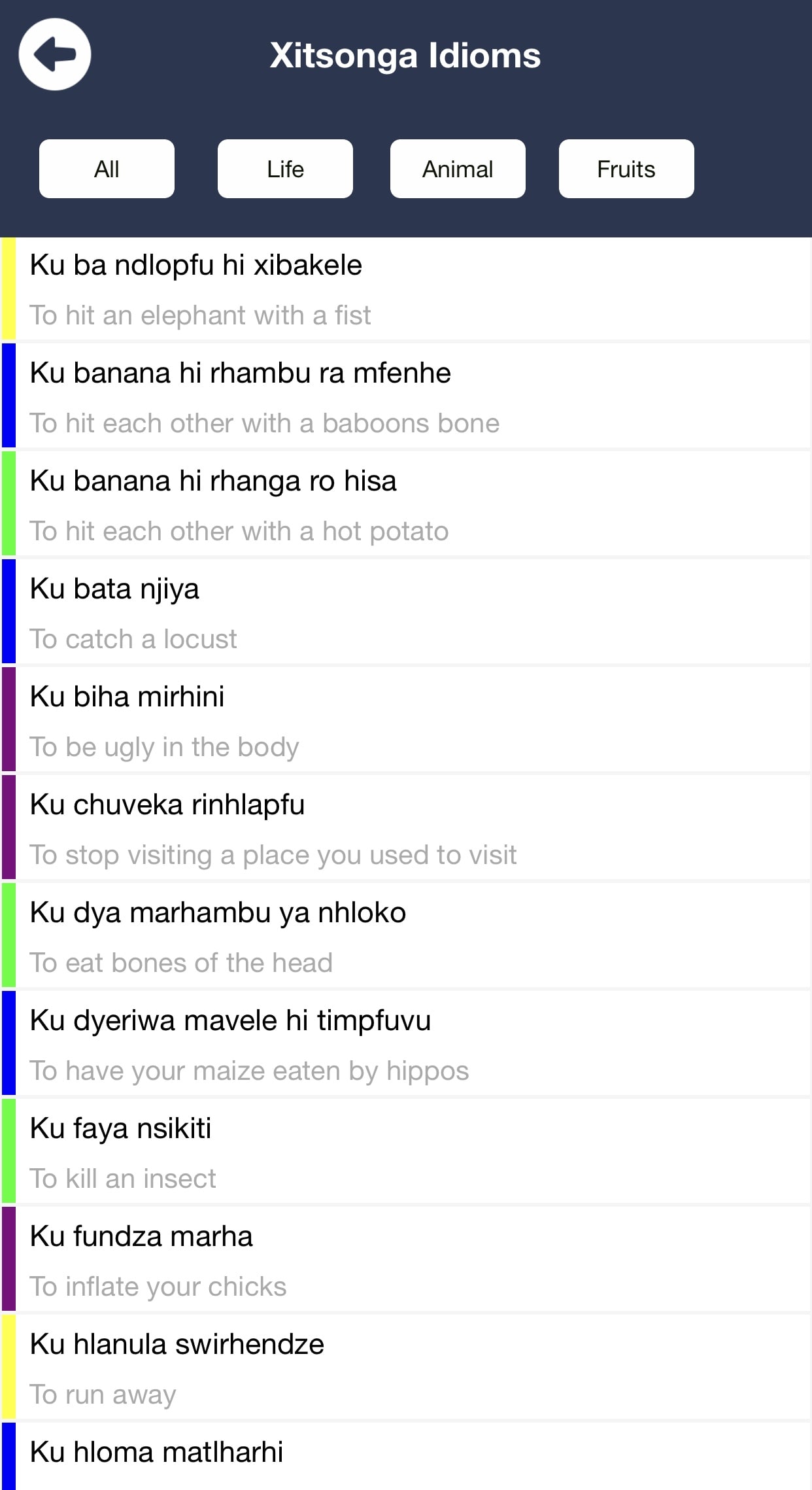 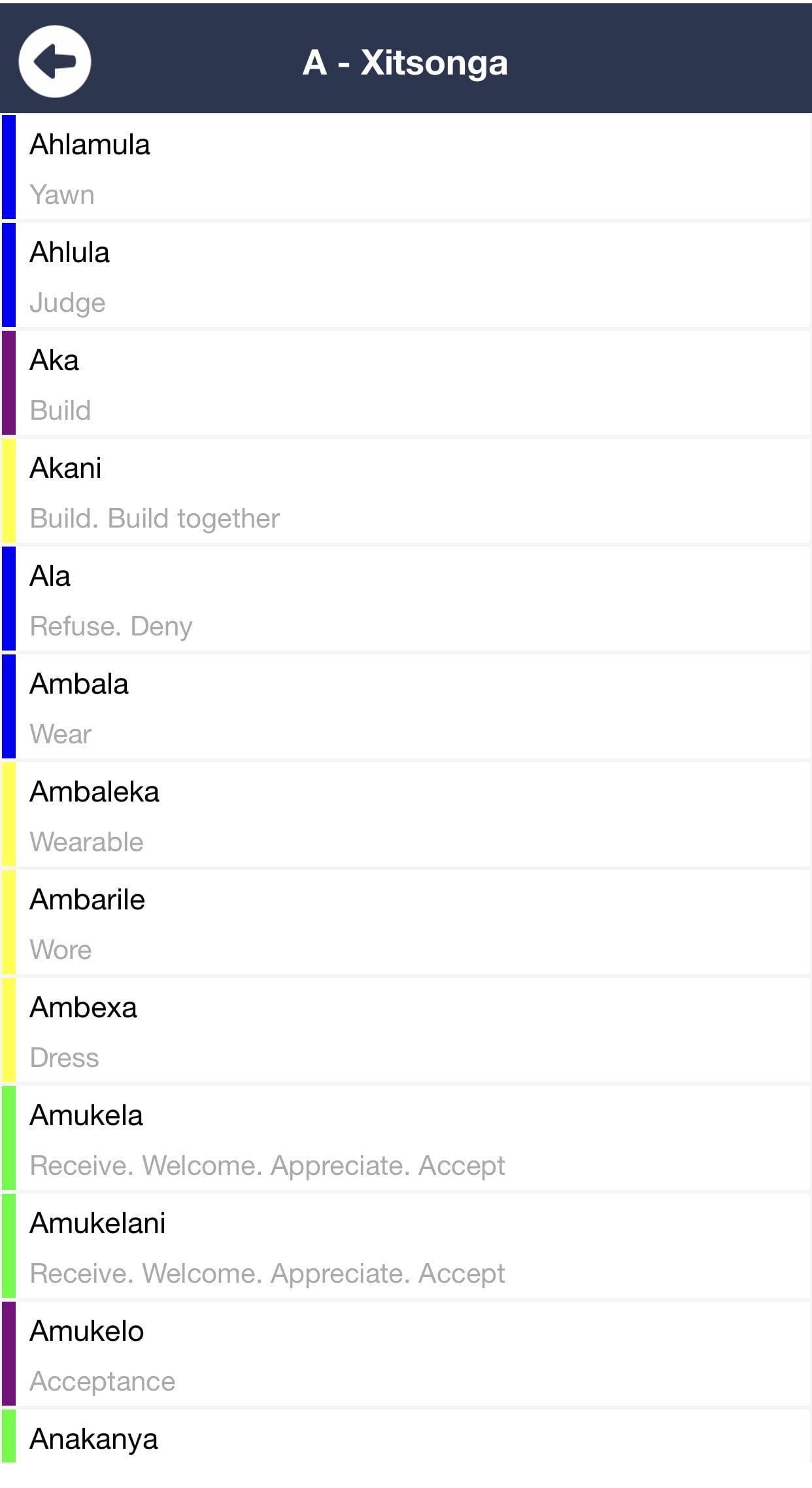 Research is critical. You have to understand your market.

Also, don’t burden yourself with things that don’t align with your strengths. Focus on building a team, so the various roles are fulfilled by people passionate about them.

It means exactly that, Built In Africa and built for Africans.

One of the challenges that we face here in South Africa is that a lot of the popular apps are international, i.e., Facebook, Twitter, etc. So what ends up happening is it orients our mind as devs to think on a global scale when building products, which is not bad.

However, we shouldn’t do that and neglect some of the core problems that need solving within our communities. I could have been better served building something that could reach billions of people instead of building Xitsonga.org.

So to my developers, understand that there are needs within your community, province, and country, that we can address with code.

What are your thoughts on Tech in Johannesburg?

The tech scene in Joburg is vibrant. You’ll always find people at coffee shops building something, and there’s this spirit of collaboration across the community. Which makes it an exciting and motivating place to work. There’s also a lot of support for local entrepreneurs from large companies.

Joburg is fast, and things are always happening.

I left Johannesburg a month ago for Cape Town, but I haven’t had the opportunity to go out much due to COVID–19.

I hear Cape Town is where the money is. A lot of the big investors and venture capitalists reside here, so I’m looking forward to building my network so that one day I’ll have an opportunity to present to some of these investors.

I’m currently working on two other startups. One called Roundafire, which is an application for children’s books. The second one is called Utlwa, which means to listen in one of the South African languages, and is a music streaming service.

A Message to the People

Languages are disappearing across the continent. In South Africa, there was a big news story recently about a language where only two people in the world could speak it.

Both in their 80s, trying to sit with them and capture everything would be too difficult.

So, to my African brothers and sisters across the continent. We need to try and preserve our languages while there is still a chance.

Thank you! Your submission has been received!
Oops! Something went wrong while submitting the form.
More related stories, just for you
Creating a Portable PyPI Server for Offline Access: Developer Hack
Digital Payments – Abeg is a New Player in Nigeria's P2P Payment Sector