The Ghanaian Youtuber leading a generation into software development 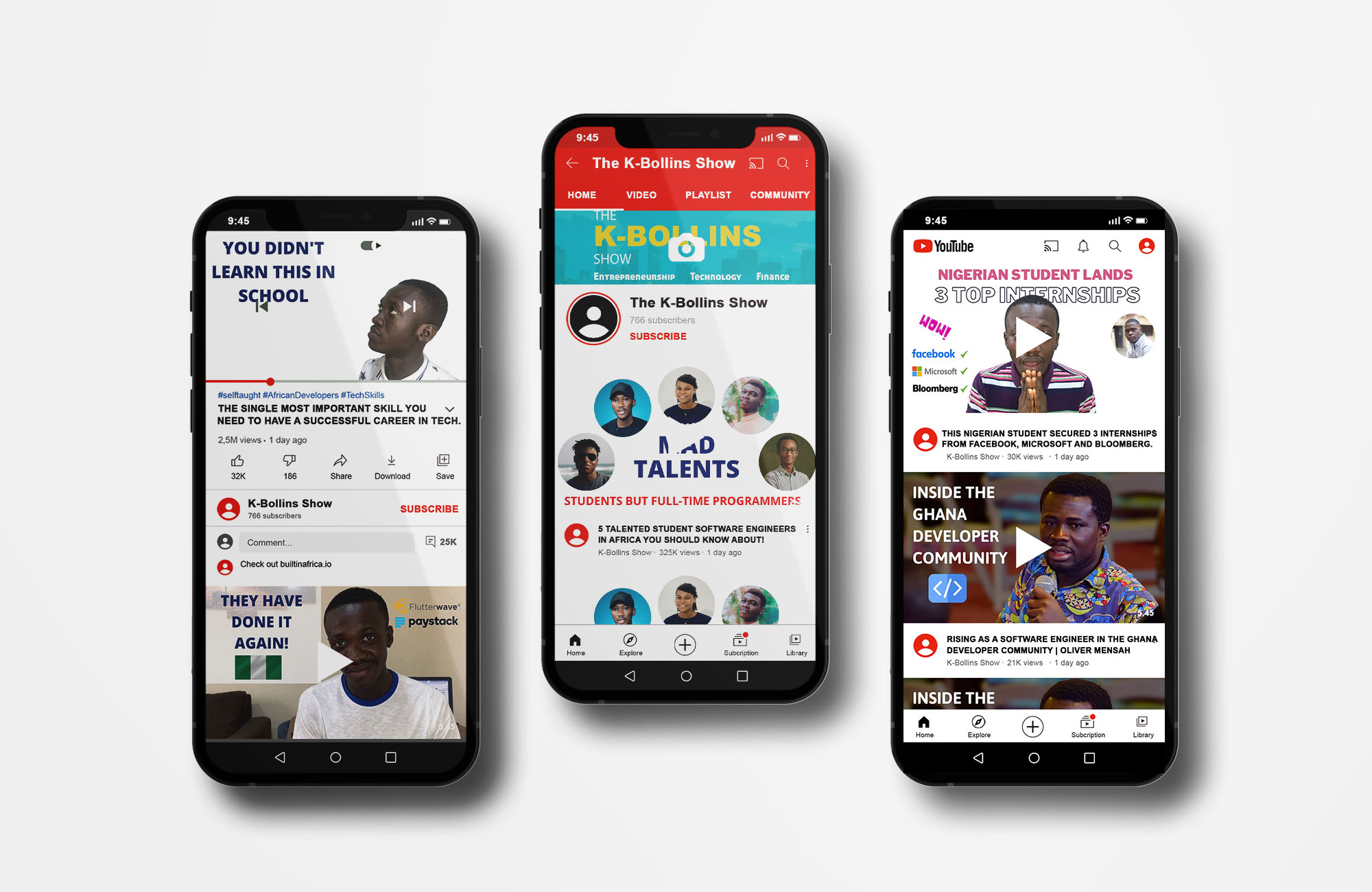 Compared to career paths in medicine, law, and accounting, the barrier to becoming a software developer is low. There are no degree, certificate, or specialized training requirements. With several free coding platforms and thousands of YouTube tutorials, all it takes is time, effort, and persistence.

Many believe that all software developers do is sit at a desk for hours, look at a computer screen, and write lines of code. Tolerating it for the perks and benefits, not because of curiosity and conviction. But in reality, software development is far from boring. It spans every industry, from fashion to medicine. And has a space for the right and left-brained.

With the desire to get more people into tech, The K-Bollins Show, is a YouTube channel where creator Kwabena Adu-Darkwa shares his knowledge about tech and encourages others to get into the industry. On his channel, he discusses how to grow in the tech space, negotiate your salary, land your first job, and more.

Recently, I spoke with Kwabena Adu-Darkwa about his channel — The K-Bollins Show, the best way to introduce people to programming, and what Built In Africa means to him.

My tech journey has been an interesting one. In high school, I was interested in business and aspired to be a chartered accountant. When I got to university, my initial major was Business Administration. My freshmen year, I took some programming courses, and later on, changed my major to Management Information Systems (MIS). As an MIS major, I took both business and computer science courses.

Even though I enjoyed programming, I didn’t think I would end up in tech after school, so I didn’t pursue any software engineering internships. Then my senior year, I decided to apply to a Microsoft job, and through the interview process, I learned a lot about the industry. With no experience, I fought my way through and made it to the finals. I didn’t get the job, but it motivated me. I thought, if I could get this far, maybe I could work in tech.

What allowed you to make it to the final round of Microsoft?

I’m someone who likes to put in the effort. Most of the candidates I was interviewing with had CS degrees. Some of them even had internships working at tech companies. Since I lacked both, I had to rely on my fundamental CS knowledge, which I got from my MIS degree. To prepare for the interview, I studied the fundamentals and reviewed programming interview questions.

Getting your first job. Advice for untraditional people breaking into tech?

I didn’t get my first tech job by applying on a job portal or a company website. I got it by attending a networking event. After the Microsoft rejection, I applied for so many roles and got rejection upon rejection, but I didn’t let it get to me.

At the networking event, I ran into a tech founder I had been reaching out to via email. He asked me what’s next, and I told him I was looking for a new role. He mentioned that they were hiring and suggested I apply. I went through the interview process and got the job.

My advice for untraditional people breaking into tech is that you don’t need to go through a job portal, a company’s site, or any other traditional way of applying for jobs. I’ve seen people in tech get jobs from Twitter by simply posting what they are learning, which draws the attention of a recruiter or founder, and then they get a job. You also don’t need to have a CS degree. What you need to do is learn something, show that you are learning, and share your journey online via Twitter or LinkedIn.

You may share and think no one is watching, but people are. A single post could land you a job. It’s why I use my platform to tell people the importance of branding themselves and sharing their learning journey.

What inspired you to create your Youtube channel The K-Bollins Show?

I’m an advocate for people entering tech because the industry is booming, fast-growing, and talent is in high demand. I’ve seen people’s lives changed because of tech. I have a friend who is a print engineer (Flexography), and recently he learned UI/UX design on the side. His flexo job requires him to go to the workplace, while his tech side job allows him to sit in the comfort of his home.

With remote work, we’re no longer limited to the job opportunities or companies in our home country. We can work for any company from anywhere and receive a competitive salary. This is why I want people to look into the industry because if you are serious about it and you put in the hours, it will pay off.

I have another friend who studied agricultural engineering, and in his second year, he started programming. Today he’s a serious Flutter developer and is pursuing his Master’s in IT at Carnegie Mellon University in Africa. Had he pursued a career in agricultural engineering, he wouldn’t have secured a job immediately in Ghana at the current state of the economy. Learning how to program gave him the leverage and skills to be dominant.

I also use my YouTube channel to share knowledge. I have videos on my journey, growing in the tech space, negotiating your salaries, adding value to yourself, applying for jobs, anything that would help someone grow their tech career.

So far, I’ve had positive feedback. People have sent me LinkedIn messages telling me that they are inspired by what I share. Recently, a finance student reached out to me saying he started coding because of my YouTube videos. Hearing those stories is fulfilling. It’s humbling to see people take the initiative because of a 5 or 10-minute video that I shot. But that’s the motivation behind my channel.

People running away from tech?

When we were in school, I saw some brilliant people run away from tech because their first taste of programming wasn’t interesting. After my first programming course, I didn’t think tech was for me even though I got an “A.”

What changed was one summer, I joined a workshop by an upperclassman where we cloned our school’s website from scratch. That experience showed me the power of programming. In my first programming class, I didn’t see the importance of forLoops because there was no practical application. But when I was introduced to web design, the concepts became real. It was after that summer that I decided to pursue a degree in MIS.

There were people who didn’t experience the summer program who were capable of excelling in tech, but because of their first programming experience, they decided to take a different path.

This is why I’m passionate about sharing what I know and telling people that tech is not rocket science. And that it’s not reserved for the nerds, the geeks, or the select few. Anybody can pursue programming and succeed. Yes, you need to put in the time to learn and build your skill set, but once you get into it, you’ll love it.

How to best introduce people into tech?

It’s important that we show people the application. When you are in a programming course, what you’re learning is abstract. You’re learning forLoops and how to store objects in values and variables.

Even though I was good at programming in school, what turned me off about pursuing a career in tech was the idea of sitting at a desk for long hours. But the reality is it happens in all industries. In finance, you will be behind a desk, but instead of coding, you’ll be in Excel crunching numbers.

Also, when you work at a large tech company, you don’t spend 8 hours a day coding. You have meetings and spend time thinking about the problem, so you may only code for about four hours in a day. First, it’s about time we enlightened people that sitting at a desk is part of work.

Second, let’s get rid of the notion that software development is boring. People need to shift their perspectives. Focus on the value you create, not the process. Think about how programming allows you to solve important problems.

In Ghana, there is this notion that the most brilliant people should pursue medicine. These are people who may not have an interest in medicine, but they’ll spend seven years pursuing it because people will think highly of them when they become a doctor. Although medicine is not the most lucrative career, the satisfaction of being recognized as a smart person is enough motivation.

I think all smart people should pursue computer science and be in tech. Yes, we need doctors, but I think tech would be the most optimum use of their time.

How do you see The K-Bollins Show evolving in the next 3-5 years?

Over the next 3-5 years, I want to create a community of learners, doers, and people who inspire others to do more. I created The K-Bollins Show to help people get introduced to coding, demystify programming, and remove the notion that it’s boring and for nerds. I want to see a community of tens of thousands of people committed to helping each other learn and grow in the tech space.

Built In Africa is something that started in Africa, is growing in Africa, and is for Africa. It means African men and women are capable of initiatives, building our own future, and creating the next FAANG companies. That is what I understand Built in Africa to be.

Thank you! Your submission has been received!
Oops! Something went wrong while submitting the form.
More related stories, just for you
Leading a Google Developer Student Club of 200+ Members
Leading Namibia's Community of Python Developers