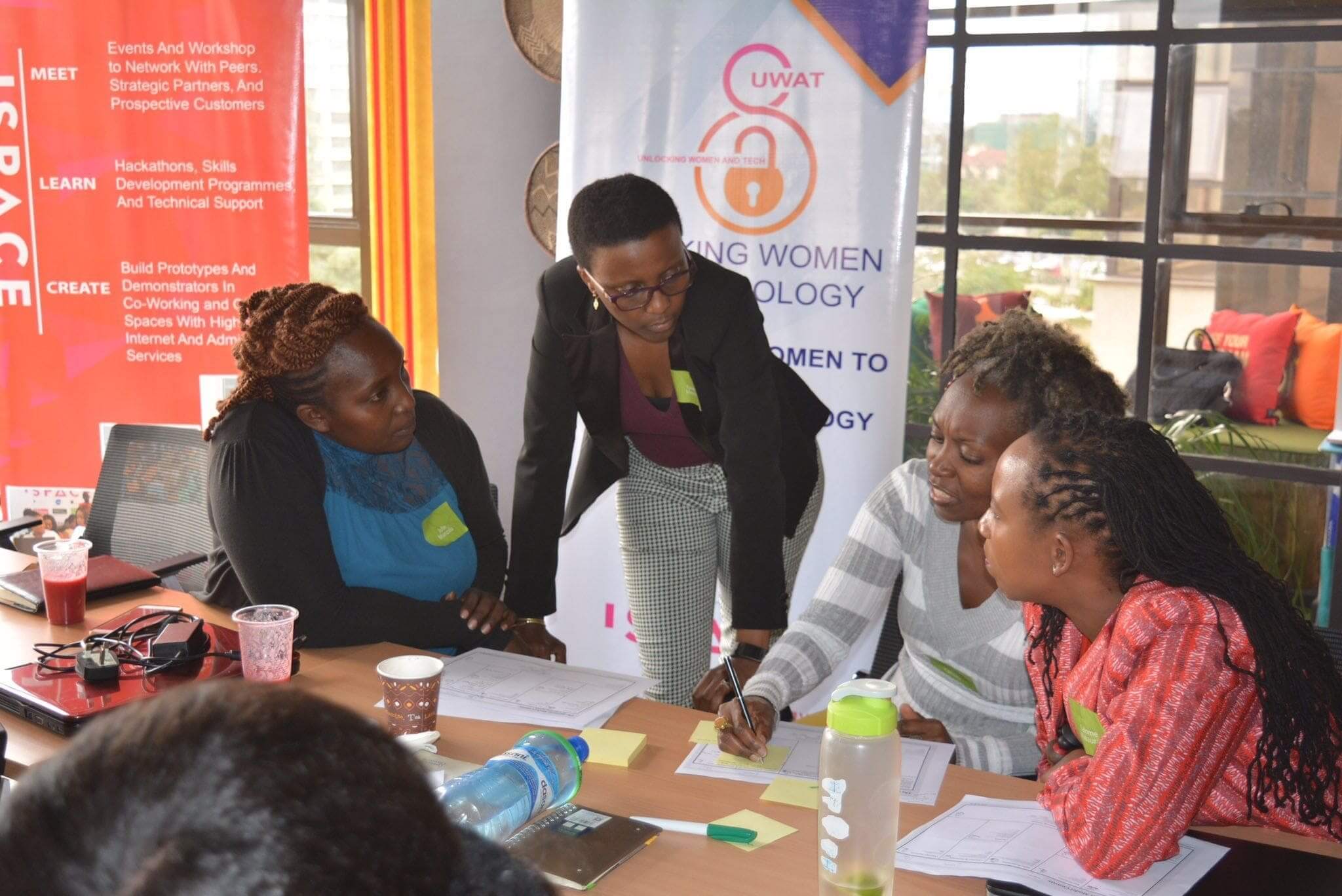 In a 2017 study, Mastercard Index of Women Entrepreneurs found that globally, sub-Saharan Africa has the world's highest rate of women entrepreneurs, at 27%.

Despite the strides countries make towards a gender-balanced business landscape, tech, arguably the future of the continent, is still male-dominated. Only 9% of start-ups have women leaders, and the percentage of female software engineers in some African countries is as low as 2%.

In tech, gender diversity produces teams that stay on schedule and under budget, which are both critical to African innovation.

However, women are not solely responsible for this endeavor; instead, it's the collective responsibility of African men and women.

Founded in 2016, Unlocking Women and Technology (UWAT) is a product of iSpace Ghana, the Innovation and Technology hub in Accra. UWAT empowers women through tech and business development training and business funding. Having served hundreds of women in Ghana and across other West African countries, UWAT's efforts were recognized on a global stage in 2018 when they received Google's Diversity and Inclusion Award.

I spoke with Josiah Eyison, Co-Founder/CEO of iSpace Foundation, about UWAT, why men are equally responsible for women in tech advocacy, and the role of the diaspora in Africa's development.

How did your journey lead you to create iSpace?

I was born in Ghana but left in 1992 at age fifteen and moved to the UK for secondary school. I then went on to college and university, where I studied New Technology, Media & Communications, then Business Administration.

My early career up until iSpace was quite diverse. Some of my initial ventures included starting a record label, a digital radio station, as well as working as a video and audio editor.

I then went on to work for a concierge company in London, opened their South African office, and later managed the Nigerian, Ivorian, and Kenyan offices.

After that, I came back to London to work for an events management company. Interested in the ed-tech space, we were looking at how the iPads could revolutionize education, but the company went bankrupt.

And that's where my iSpace journey began. It started with an event on mobile apps, where I awarded a couple of developers some money. After the event, the conversation in the tech community was, "what's next?" Assessing the landscape, I realized that Ghanaian entrepreneurs needed investors and a place to congregate.

So we created a space to cultivate the tech ecosystem. After setting up iSpace, I realized that tech entrepreneurs were not what I assumed. They were coders and people with ideas, not savvy business people. And some of them were mercenaries; they'd get involved in hackathons just to win money.

When we realized that the business model wasn't working, we pivoted to our current model of structured courses. In a nutshell, that's how iSpace came about. I'm not technical, rather the business behind the tech, which means I understand how it works and why we need it, but I'm not the guy who can teach you python or HTML.

What specific void or opportunity did you discover that inspired Unlocking Women And Technology?

Interestingly enough, we were the first people that initiated women in tech in Ghana. At the time, the conversation was around, why don't we have enough women in technology? There were events but limited action. I thought to myself, who is going to be responsible for bringing women into tech? Because women are not the problem.

We operate in an environment where more than anything else, it's about who has access to resources. And culturally, it's always the guys. When I looked at iSpace, it was always the guys who came out to partake in the events. So I decided, why don't we set up a program to address this gap in the market. And rather than rely on external forces, we dedicated 70% — 80% of our resources to ensure that we grew female tech founders from both the technical and business side.

As a man, why was it important for you to be an advocate for women in tech?

Women make up 50 percent of your customer demographic. Any business that wants to grow, it makes sense to include women in the process. Also, it's not like men are building products only for men. And an app doesn't care whether a female or male is using it, but when you exclude a gender, you end up creating a product that does not consider them.

Having women on your team is a win-win. They bring a perspective that is different from men. Also, I have this notion that if you put a group of men in a room, the ideas they'll come up with will be stupid, like we want to go to the moon. Ideas that are not really solving a problem per se, but if you add a woman into the group all a sudden, we become socially sensible.

All of that is so natural for women. They are more likely to create businesses that address poverty, inequality, and other social issues.

And as men, I think the question is, we've had it good for so long, so what are we going to do to empower our women?

Growing up in the UK, I witnessed racism. So I understand that racism is a system set up by a bunch of people who have agreed that this is how things are supposed to be.

Concerning women in tech, those of us that have the resources have to change. We have to advocate for women coming into tech and recognize that it doesn't take anything away from us. If anything, it adds to what it is that we already have because it brings a different mindset and creativity.

Can you provide some insight into the structure of the UWAT Program?

When you walk in our door, we sit down together, and you decide if you want to go through our technical or business program. Then we assess your current skill set and develop your personalized curriculum.

We have women who come to us and can't code but have an idea and they leave with a product.

The first three months are the ideation phase, which includes exploring your idea and training. For example, if you take the business course, you'll learn about the business model canvas.

After three months, you move from ideation to development, Phase 2. Development is the MVP stage. Here you find your customer demographic to ensure that your solution actually solves their problem. We dedicated twelve weeks to this because it's an iterative process. And you need time to create your MVP, which can be a website, service, or app.

From the start of ideation to the end of development is six months. The final three months is your incubation stage, where you launch your business. This is where we give the women basic funding, which ranges from $500 — $1,000 to set them up.

The idea is to help them pay for all of the little things they need to get started, like registering their business or getting business cards. Then we help them find funding. We've been able to raise l$10,000 in funding for some of the women in our program.

The program takes nine months because from a technical perspective if you want to be a software developer, you start off doing your HTML and CSS. From there, you can go the JavaScript route to create mobile apps or get into python to build e-commerce websites.

We structured it in nine months but broke it into 3 three months sessions, so the women come out with something at the end. 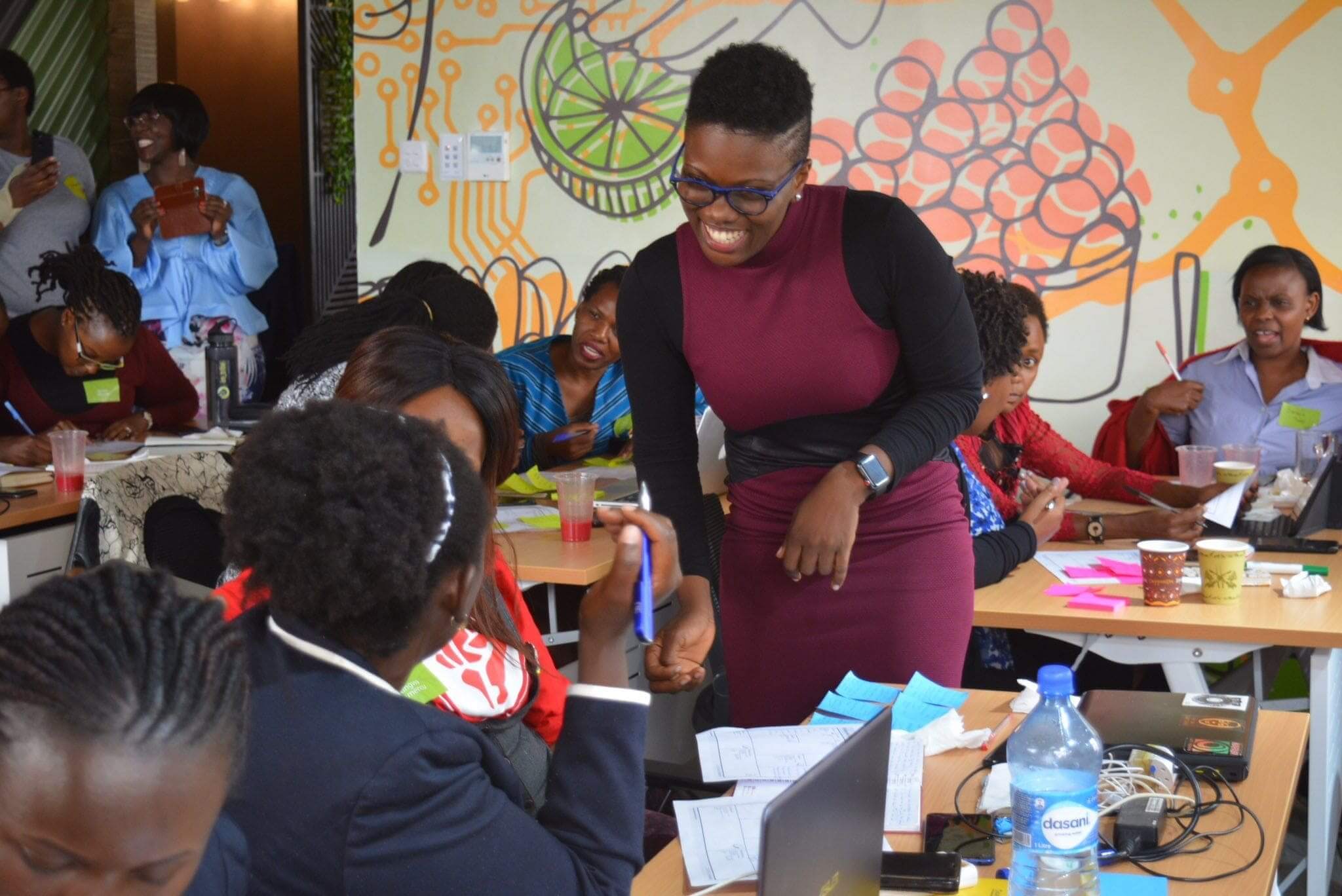 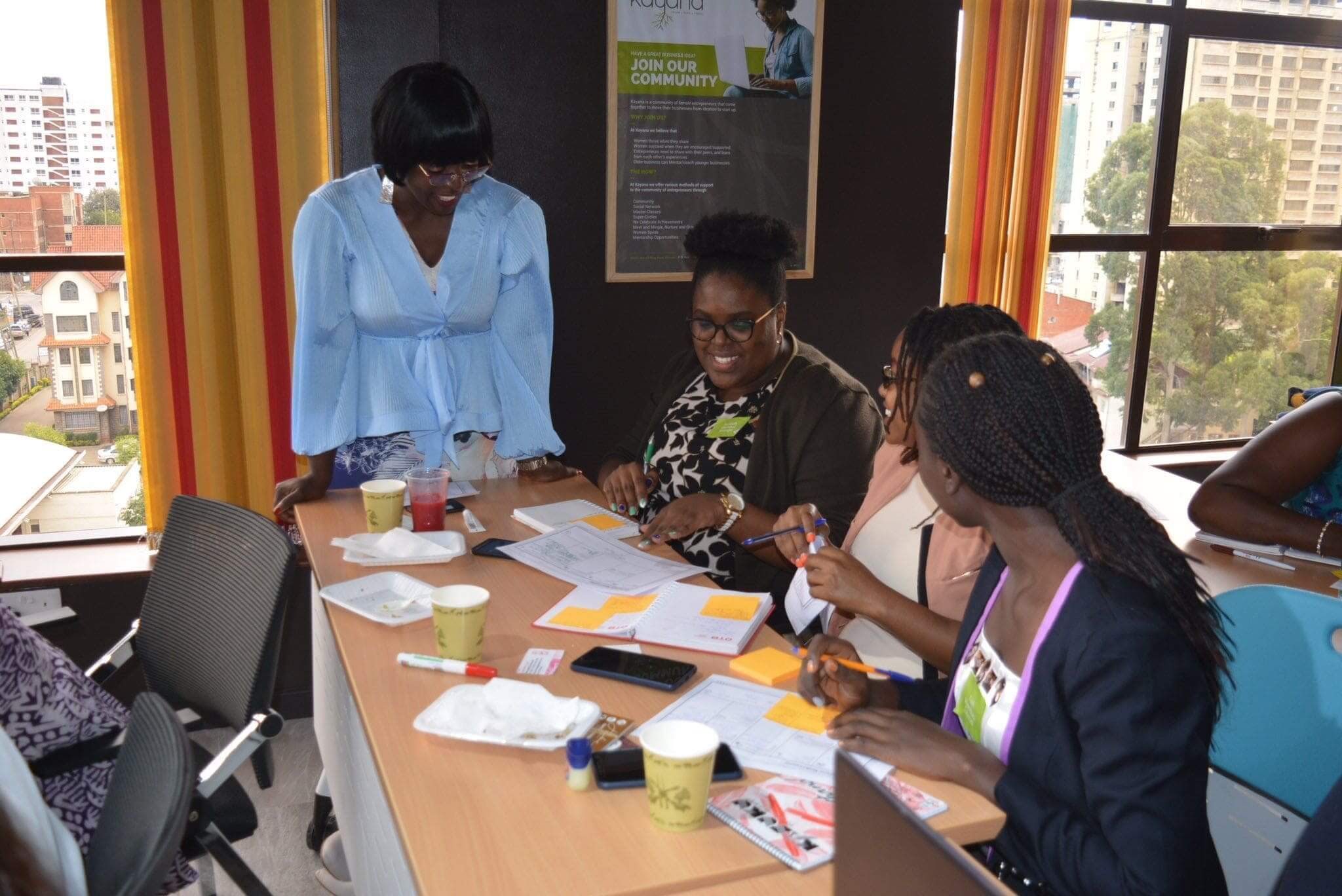 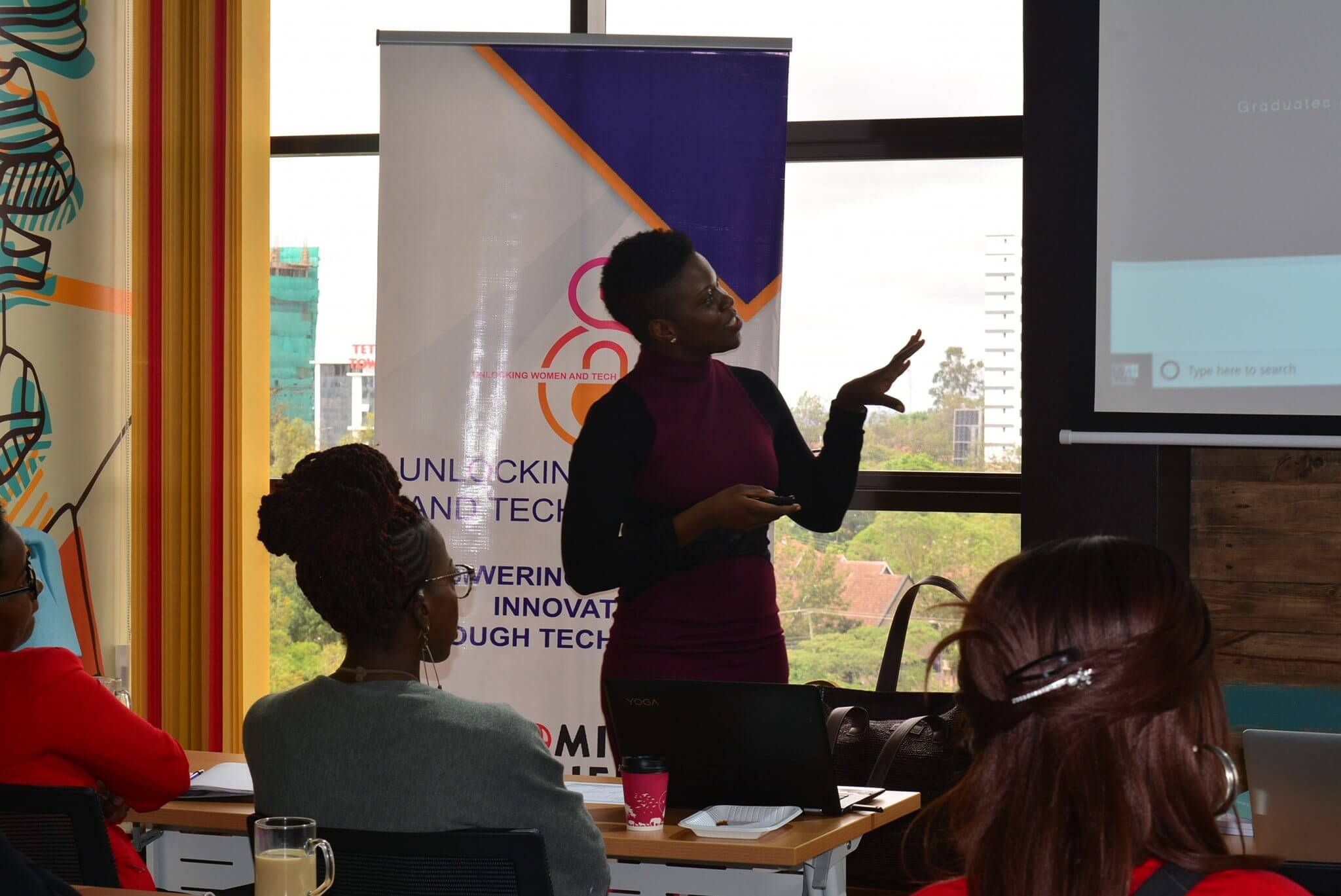 Can you share a story about how an alumnus is leveraging the skills they learned in the program?

The women in UWAT are doing some amazing work.

How do you see Unlocking Women And Technology evolving in the next 3-5 years, and what impact do you hope to make?

In our second year, we realized that we were only focusing on Accra, so we partnered with hubs in about seven other regions in Ghana to extend our reach. That went very well, so we decided to step outside of Ghana and go to Nigeria and Kenya.

Personally, I want UWAT to be a continental program, in about a year or two, that's what the new strategy will be. Once it's become continental, I would love to see it run in minority communities across the diaspora, whether it's D.C. or NYC. There are black communities that don't have access to tech hubs and the resources that our hubs offer.

Also, the women that have gone through UWAT have skills they can teach people in the diaspora like coding or building a website. I think it will make a great story to have an African program that is then migrated to Europe and the US. This way, it's no longer the usual story of the diaspora teaching the continent, but the continent helping the diaspora.

That question can be unpacked in so many ways. From a value chain perspective, Built In Africa means that the idea came from Africa, was built, and can be accessed here.

It means that the raw materials and the end product were produced here. It's no longer a situation where people take our raw materials, produce it elsewhere, and then bring it back. No, the whole value chain must be done by an African.

And to me, an African outside of Africa is still African.

If I connected with you on an idea, irrespective of where we build it from, as long as it's me and you doing it, it's Built In Africa because the children of Africa built it.

A message to the Diaspora

The diaspora should find ways to tap into the movement that is happening in the continent. Do not think that you need to be a millionaire to do something in Africa. If you have an idea, we can connect you with the right people and then build from there.

Even if you are in university right now, it's still a great time. Just connect with the continent. There is talent here, people who would happily welcome you and your vision and assist in making it a reality.

One of the best ways to do so is to google the tech hubs in the various African countries and contact the hub managers. Then they would, in turn, introduce you to the right people.

I think the diaspora has a vision that a lot of us on the continent don't have at the moment, while we have a local understanding that the people in the diaspora don't have. And if we can create that synergy, we'll be able to do some amazing things together.

Thank you! Your submission has been received!
Oops! Something went wrong while submitting the form.
More related stories, just for you
Meet the Burundian Developer Building Community & Digital Experiences
The Next Generation of Learners, Disruptors, and Inventors – Largest Pan African Hackathon