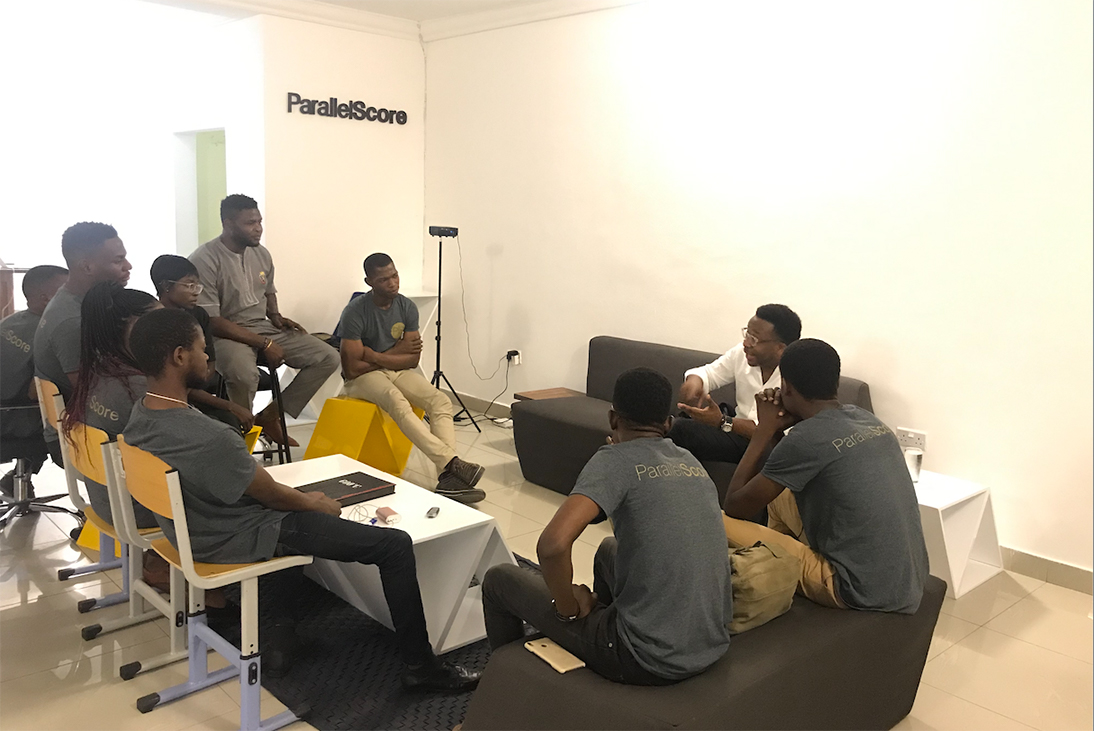 AI, IoT, machine learning, blockchain, along with several other emerging technologies, are set to reshape the world we live in.

As a result, forward-looking organizations are rethinking the way they do business as these technologies have the capacity to enhance performance, improve customer service, develop new products, and create cost efficiencies.

Although these technologies are frequently discussed, a small number of companies actually use them, and arguably an even smaller number of professionals can build and implement these solutions.

As the world moves deeper into the Fourth Industrial Revolution, Africa's tech ecosystem hopes to leverage these technologies to overcome the current infrastructure and institutional challenges. To ensure the talent is prepared, ParallelScore is laying the groundwork in Nigeria.

Founded in 2016, ParallelScore is a product development firm that develops, mobilizes, and deploys Nigerian engineers with proven expertise in emerging technologies such as Blockchain, AI, Machine Learning, AR/VR.

Started by two Nigerian Americans on a mission to create 1,000 jobs in Africa by 2030. ParallelScore empowers their teams with the skills needed to build emerging tech solutions, so they can, in time, build their own companies, hire people, and contribute to the growth of Africa's tech revolution.

I spoke with Adebayo Dawodu and Chika Umeadi, Co-Founders of ParallelScore, about what led them to Africa, building emerging tech solutions, and their tips to other entrepreneurs considering tapping into Africa's tech ecosystem.

What value does ParallelScore provide to the marketplace?

I think our value to the market is threefold.

First, we're rethinking what outsourcing looks like because we believe the current model can be improved as it's currently very extractive. We're working to make it more collaborative.

Second, we're working on the technologies of tomorrow, today. Our core business is developing solutions using bleeding-edge technologies for global consumption. For example, we're currently developing a product leveraging technology where only a handful of people globally have exposure to it. Through our work, we're building cool stuff and developing the next generation of engineers who will directly contribute to the future of global technology trends.

We also want to signal to the market that outsourcing isn't just a strategy to get your lowest technology needs met. Rather there's real value creation opportunity in the marketplaces that we're working in and the teams we're working with.

What are the problems with the current approach to outsourcing?

The reality that we're seeing is that companies are doing a lot of thinking and dictating. They'll come up with a strategy and plan, tell people how to build, what to build, and how quickly to build it.

At ParallelScore, we're championing a collaborative experience with our clients; it's like agile on steroids. We're bringing in our clients and their teams, marrying our processes with their processes, learning about the customer, and doing all of the discovery work together.

We believe that beyond the price that a client pays for a team, there's real value in bringing people together and collaborating actively and frequently. And that's what we're pioneering at ParallelScore.

What excites you about emerging technologies like blockchain, AI, and natural language?

Typically when people think about emerging technologies like AI, VR, machine learning, and blockchain, it's very theoretical. At ParallelScore, we're taking theoretical concepts and applying them to real problems.

We recently developed an application for a company in the healthcare space to address the new United States policy, which requires that healthcare data be made accessible for all patients. Working together, we created a solution that used a combination of blockchain and machine learning to ensure that all patients have access to their data and can share it with other people.

The idea of leapfrogging both from a technical and talent perspective. We've seen how fintech has transformed Africa and allowed countries to leapfrog the need to create traditional financial institutions. We see the potential of these technologies to help Africa leapfrog in many other industries.

Also, if the talent can leapfrog and be ready to build solutions with these technologies, it will be easier to capture the opportunity when everyone wakes up to it.

How did ParallelScore lead you to Nigeria, and why Africa?

Our other company, Tiphub, focuses on investing and supporting early-stage entrepreneurs building companies at the intersection of technology and impact. As we were working with companies, we realized that a lot of them were coming to us with ideas and business plans, but didn't understand the technology components required for it to be built.

That sprung up the need for ParallelScore and presented the opportunity to build the company as a global pillar to demonstrate that we could build the future in Nigeria.

It's not that ParallelScore led us to Africa; Africa led us to ParallelScore. With Tiphub, we tried to speculate what was happening on the ground from thousands of miles away. We had some valid data points, but the reality is different when you are on the ground.

And so in 2015, I left my consulting gig with Accenture, and I went to Nigeria for a few months to study the ecosystem and live like a local. I worked at the coworking spaces and incubators, I took the bus and okada and ate the local food.

And why Africa? It's not because I'm Nigerian, that's a secondary benefit. It's because Africa is now, and I fundamentally believe that we're not going to see a greater world if Africa is not stable.

And to address the continent's challenges, you have to be there. You can't just send money to Africa; you have to go to Africa, so that's why I'm here. 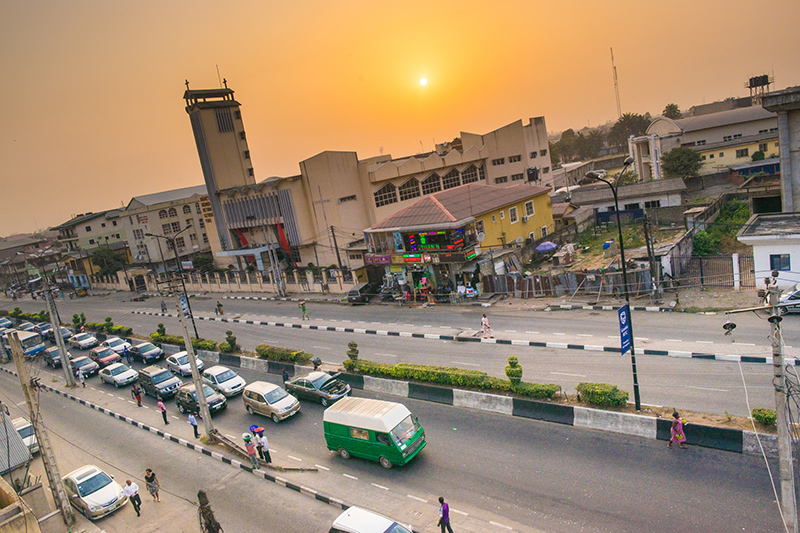 How did you go about identifying tech talent in Nigeria?

Over the last five years, I've probably seen over a thousand resumes. I've connected with many organizations, recruiters, and communities to find talent. And it's been a challenging process, to say the least.

We've tried it all, but that's led us to build our own internal talent development process, and it's something that we're trying to automate and be able to scale out using our platform devcom.parallel.

We recently created a partnership with a university in Nigeria, which has over 8,000 students who graduate every year in the technical space. This partnership will give us the pipeline we need.

We've also experimented with something called "jobathon," which is a hackathon for hiring. We take the same existing hackathon idea whereby the job opening is not centered around a person but a problem you're trying to solve. We'd bring in about 50 people and hire like five people on the same day. We've experimented with that a few times, and it's worked for us.

When you're building in emerging markets, you realize how many traditional processes aren't so effective. And hiring everywhere, not just in Nigeria, presents its own unique set of challenges. And so for us, we tried to optimize for a couple of things:

2) We also were not looking for people that had a particular competency. Instead, we looked for people with a consistent track record of learning new things and applying them.

The problems we're trying to solve, we don't know the solution. So we can't rely on variables like experience because it might be a false indicator of who would be a potential fit for the client and opportunity. Over time, we've had to refactor our process, and as Bayo mentioned, it's an ongoing process.

Tips to other entrepreneurs considering tapping into Africa's tech ecosystem?

There is no manual for doing business in Africa. However, your potential for success is strengthened by the community you build and invest in.

What I've learned from being there consistently for the last six years is the power of community. I have many friends who have built successful businesses in Africa, from restaurants to tech companies. And just sitting with them to discuss challenges and problems in the context of hope, not in the context of issues, is refreshing.

Note, vision and culture need to be set before the actual operations because operations can be borrowed from existing ideas. Lastly, it's imperative to have integrity and not take shortcuts; you'll pay for it later if you do.

First, be aware of your ecosystem value chain because even if the idea makes sense, there will be challenges in your value chain, and you may have to build those parts out.

Moreover, there are a lot of businesses with good problems, meaning the problem is a huge market opportunity, that will find themselves in markets like Nigeria, Ghana, etc. However, to capture the market opportunity, many of these businesses might have to build a lot of the infrastructure. So as an entrepreneur, you have to decide if you're comfortable with that.

Second, I think there's value in not just building for a specific country. One of the challenges with markets with very high variance in forex is that you have to hedge your bets. And the way you do that is by diversifying your market exposure.

Third, do the work. There's this glamorous perception of the entrepreneur that has it all figured out and has people to do things for them. But the reality is that early on in your business, you have to do the work to understand how things work. You have to understand the pain points and challenges that your employees and the other stakeholders face.

You can't hire out of that, and if you do, you're probably putting yourself in a bad position over the long term. So focus on doing the actual work before you hire.

Also, as you scale, even though it's expensive, you have to invest in building a middle management team so that the daily operations are taken care of, allowing you, as a senior manager or founder, to work on not in your business.

Built In Africa, to me, means conceived, planned, and developed in Africa. It's not only created, but the value itself is also built here. I was recently talking to a founder about coffee and the idea that when the beans get exported, values added, and then they are sold back to those countries.

So for me, Built In Africa is a counter-narrative to what we see today in other industries, where it's conceived here but is extracted and developed elsewhere. It goes beyond the idea of just being built in Africa. It's about also capturing the appropriate value from what's built.

Thank you! Your submission has been received!
Oops! Something went wrong while submitting the form.
More related stories, just for you
How New Tech is Redefining Nutrition Across the Diaspora
Investing made simple: How daba is enabling retail investors to fund African startups