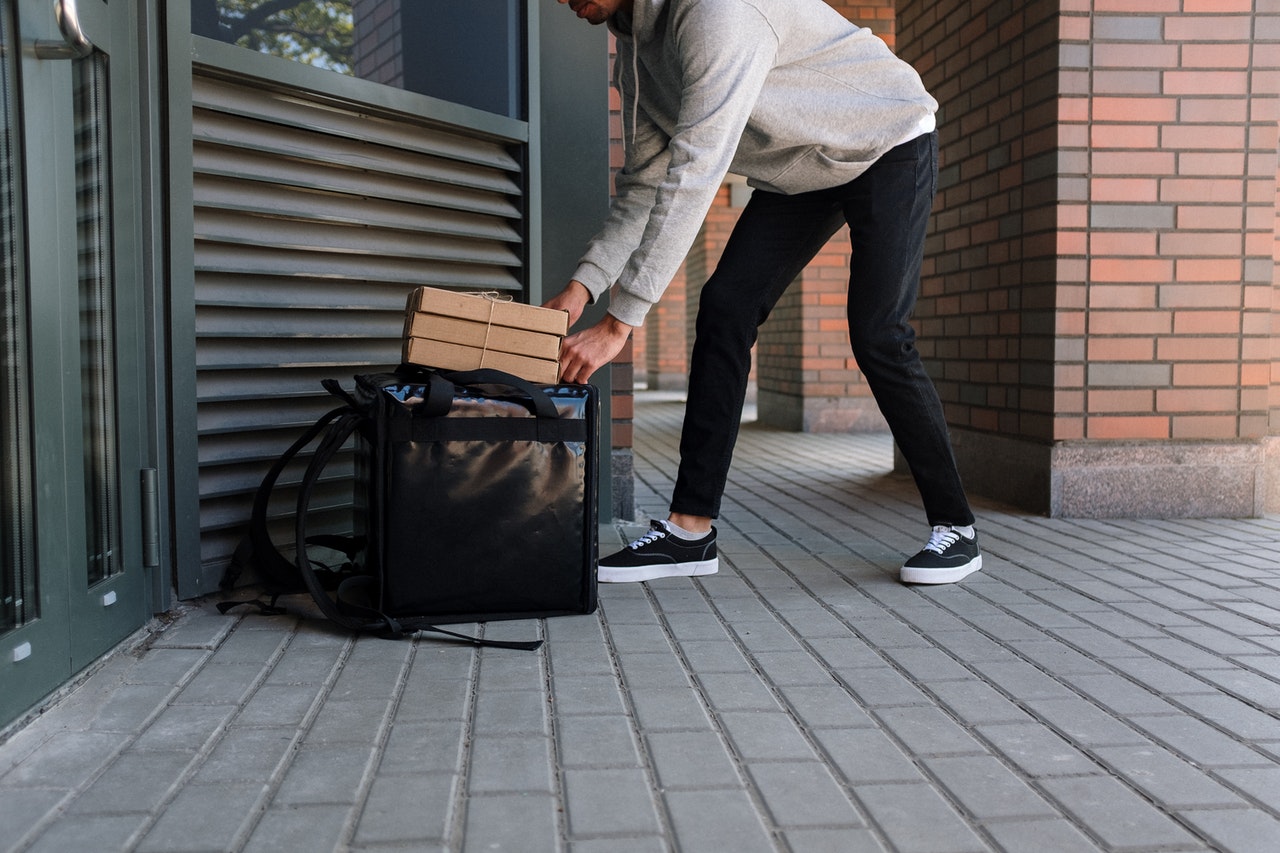 According to The Kenya Food Index Report, Nairobi is the leading city in Africa for online food delivery, outpacing cities like Casablanca, Lagos, and Kampala. Today, Kenya’s online food and beverage market is estimated to be 16.4 million dollars, the lion share coming from the country's five largest cities.

A global phenomenon, many small cities, and towns never, or are the last to experience online delivery. In Kenya, the global providers like UberEats, Jumia, and Glovo, who control most of the market, have yet to expand beyond the major cities.

Traditionally, from San Francisco to Nairobi, large cities have been the starting point for online food delivery companies. However, Ficar Delivery is going against the status quo by starting in smaller towns where they can more easily capture market share, get to know Kenyan consumers, and gain some momentum before competing with these global companies.

Founded in 2019, Ficar Delivery is a Kenyan food and beverage delivery service looking to position itself for national expansion by getting a stronghold on Kenya’s smaller markets. Currently, operating in Nyeri, a town of 60,000 people, Ficar Delivery is set to expand to Thika and Nakuru over the next eight months.

I spoke with Reuben Kihiu, Co-founder of Ficar Delivery, about running a food delivery service that operates in a smaller market, the importance of security in software development, and running Young African Developers Community.

I’m from a small town in Kenya called Thika, but currently live in Nyeri. I’ve been a software developer for the last four years. I was a full-stack developer for some time, but I transitioned into focusing on front-end development and design over the last two years.

My journey into software development started in high school. We used to have this unit called computer studies that introduced us to computers. We’d go to a computer lab and learn things like Microsoft suite. Then, I bumped into an old HTML book in the library and started learning on my own.

I would write code in my notebook, so when I got to the computer lab, which was about two times a week, I’d write the HTML into a browser. Since coming to university, I’ve learned a lot by joining tech communities, participating in hackathons, and doing projects.

What is Ficar Delivery and what value it provides to the marketplace?

Ficar Delivery is an online platform where users can order food and drinks; we are like a Kenyan UberEats. Our business model is a bit different because we are starting in smaller towns, not big cities.

Normally you’ll find that these platforms are only available in places like Nairobi. Recognizing that people in other cities would love these same services, we launched Ficar Delivery.

What separates us from our competitors is Ficar Delivery was built by people who live here, so we understand the people, the market, and their needs because we’re part of them.

While the main products in the market, Glovo, and UberEats, were built in other countries and then brought here, which means we have to conform to what they have. While we’re building from the opposite direction, so our product easily fits into the culture.

Operating in a smaller town has given us the opportunity to validate and refine Ficar Delivery. It also only requires us to have two delivery guys for the town deliveries, which makes our logistics requirements very easy.

On November 5th, we launched in a town called Thika — the fifth biggest town in Kenya because it still hasn’t gotten service from the big platforms, so we’re excited to expand there.

How did you translate the requirements of your business problem into code?

It was actually a problem that my co-founder and I experienced. For example, we’d be sitting at his place feeling lazy and not wanting to cook. Thinking, what do we do? Do you have a boda boda that we can send? It was just a hassle.

Moreover, we talked to our friends and asked if they would like to have a local UberEats. People liked the idea, so we began doing some market research and connecting with our potential users — young working-class people in the town. We wanted to see if it was something they would like.

We also talked to restaurant owners in Nyeri. Through those conversations, we learned how they were having trouble with delivery. It was clear they needed a solution to reach their customers that wanted takeout.

What role did empathy play in building Ficar Delivery?

One of the reasons that we have had a V1, V2, V3 is trying to understand our market and our users better.

We used to spend a whole day just making calls, talking to clients, and asking them questions about their experience using our app and what they’d like to change.

We would then create a storyboard for all the user’s feedback and brainstorm ideas for addressing the problems. For example, if they feel like they’re going through too many pages before ordering, we’d try to find ways to alter the design to reduce the number of pages.

One of the complaints we got was using the PWA, so we’re launching our new app built in Flutter next month. They didn’t like installing a PWA to their phone because when they opened the app for the first time, it would have a lot of things to load, which caused the app to be very slow.

Moreover, we have built a strong relationship with our users. They know that if they voice an issue, we will work to address it.

Share your experience getting hacked and the importance of security?

I built the first two versions of the product from scratch—everything from the designs to the back-end. Then, the night before our second launch, the CEO called me saying, look at the site because I don’t know what I’m seeing.

Visiting the site, I saw someone had gotten access to our server and posted fake restaurants with fake products so that people would buy them and he’d get the money. He also changed all the credentials to deny me access to the server.

The good thing is that since high school, I’ve been curious about cybersecurity, and so I was eventually able to kick him out because there was one part of the system he hadn’t locked me out of.

Arguably it was the most challenging six hours of my life because I couldn’t afford to wait until morning and allow customers to order from the fake restaurants.

From that time, I’ve never joked with security. It’s now the first thing that I make sure is working before I do any other thing.

Too many developers just want to launch a product and see if it works. But it’s not worth the risk of getting hacked and not only losing money per se (because you can lose money and make more money) but losing the trust of your clients, which is even worse.

Now everybody I meet and talk to in the different communities I’m a part of, I try to emphasize the importance of security.

What advice do you have for up and coming developers?

College gave me the basics, and then the rest was up to me. Many developers go to campus expecting that they will get the skills there and get frustrated when it doesn’t happen.

Moreover, my first advice is to start where you are with whatever you have, don’t wait until you have the latest MacBook Pro or the fastest Internet connection to start programming. Like I told you earlier, I started programming by writing HTML on a book and then waiting until I could go to the computer lab to write it on the computer.

Second, follow your passion. These days a lot of people are doing something because it’s the highest paying skill or it’s the most in-demand, which isn’t a good strategy. For example, if you learn React today because it’s in demand, and two years later, it’s no longer in demand, you’ll be left with a skill you don’t like.

However, if you do something because you like it, you will stand out and get the few available opportunities even if it’s not as popular. Like me, I went from full-stack to front-end because I loved front-end more than back-end.

I realized that although I may sound very fancy when I go to tech community events and say I’m a full-stack developer. Afterward, I’m the one who has to go back to my laptop and do back-end. I originally did it because I had to, but now that I have the option not to, I decided to do what I love, which is front-end.

Built in Africa means a product that is built for Africa with Africans in mind. Not a product made somewhere in Europe or the U.S, and it’s built based on what they think Africans may need, but it’s a product built with the African problems, culture, and way of life in mind.

My background as a community leader goes back to my time on campus. In 2019 I was the lead from my campus Developer Student Club (DSC). After leading DSC, I was invited to be one of the organizers of GDG Nyeri.

In April, with everybody being at home due to COVID-19, I had the idea to start my own community specifically for young upcoming developers and offer mentorship. As I began to make a name for myself in the tech community, I began getting approached by young developers who wanted advice, and it was so much that I couldn’t keep track.

And despite the number of developers who reached out for mentorship, I knew there was much more out there in need of help. The ones that approached me were the ones who had the courage to do so, and there were plenty more in need but too afraid to ask.

The community is for young upcoming developers, and we give them a road map and hold their hands as they’re starting their careers. Initially, we started with just hosting webinars and inviting speakers to discuss specific topics like choosing which languages to learn or what career path to pursue.

When we started, we only had people from Kenya join. Then, through GDG, I had connections with Nigerians in tech, and so the next place we got members from was Nigeria. My Nigerian friends also pushed it around West Africa to places like Ghana.

Soon we started having people joining us from South Africa, Zimbabwe, Malawi, and all the other East African countries, including Rwanda, Burundi, Tanzania, and Ethiopia. The last time we had a meeting, we had members from 11 countries.

In September, we piloted our six-week mentorship program with eight mentees. We received 123 applications, which shows us that people are in need of mentorship.

I believe it’s the most intense mentorship program because mentors can push mentees to their limits by giving them work and projects. And instead of one mentor with 20 or 120 mentees like most programs, it’s one mentor to two mentees.

We don’t focus on having as many mentees as possible; instead, we aim to create an impact. We realized that when a mentor Is overwhelmed with too many mentees, the mentees end up not getting a lot out of the experience.

Currently, we have over 30 mentors who have shown interest in signing up for our next cohort, so we’re really excited.

Thank you! Your submission has been received!
Oops! Something went wrong while submitting the form.
More related stories, just for you
How Tech is Changing Logistics Across Africa & Driving Down the Costs of Goods
Connecting Kenya using an Online Directory of Hotels, Restaurants, and Businesses